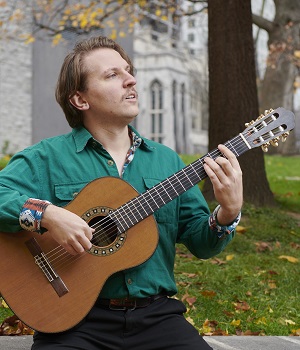 The guitar has become a passport to Trevor Cooper, and it travels with him wherever he goes.  It has taken him from his upbringing in the cold western Canadian Prairies to the heat of southern Spain.  Large urban centres like Toronto (U of T, BMusPerf '13) lead to mountain towns like Salzburg (Mozarteum, MA '19).  In Spanish Vistas, he realized a life-long dream and made his orchestral debut performing the Concierto de Aranjuez with the Concordia Symphony Orchestra under the direction of Danielle Lisboa.  In 2018 he toured western Canada and Norway with Henry Reitan.  He has performed recitals with the Guitar Societies of Edmonton, Calgary and Vancouver and has recently given masterclasses at Mount Royal University, the University of British Columbia and Concordia University of Edmonton.

In 2015 Trevor Cooper was one of 14 internationally selected guitarists to study in the III Master de la Interpretación de la Guitarra Clásica at the Universidad de Alicante in Alicante, Spain.  There he studied with Grammy award-winning artists David Russell, Manuel Barrueco (guitar), Paul O'Dette (lute / early music), Jose de Eusebio (conducting) as well as Paul Galbraith, Pepe Romero, Fabio Zanon and others.  This followed travels to Seville, Spain, where he was invited to study with guitarist Francisco Bernier.

At 17 Trevor was accepted into the University of Toronto Faculty of Music Performance program.  There he studied guitar with Dr Jeffrey McFadden and Performance Practice with Dr Kevin Komisaruk (Palliative Care / Keyboard).  During this time, he gained local success and won the Guitar Trophy at the 2012 Greater Toronto Kiwanis Music Festival.  He received national recognition with 1st place in guitar at the 2013 FCMF National Music Festival in Waterloo.

Born and raised in Edmonton, he started playing guitar at a young age studying locally with Michel Forestier.  He currently plays on an Alector guitar (Thessaloniki, Greece) with Knobloch strings.

Trevor would like to thank the Edmonton Communtiy Foundation and the Friends of Ann Burrows Foundation for their faithful and generous support during his studies.