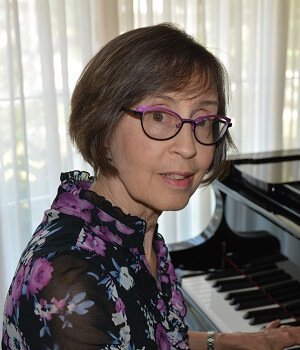 Andrea Battista received her formal musical education in Winnipeg, where she obtained a Performer’s Associate in both piano and violin from the RCM. She also received an Associate and Licentiate in piano performance from the University of Manitoba. She has been teaching piano for over 50 years.

Andrea lived in Chatham, Ontario for 20 years, where she taught both violin and piano. She was twice President of the Chatham-Kent branch of ORMTA, was artist selection manager for the Chatham Concert Association and sat on the Board of the Chatham Cultural Centre.

Andrea organized the ORMTA provincial convention, which was held in Burlington in 2012, featuring many prominent Hamilton area musicians such as pianist Valerie Tryon and Dr. Laurel Trainor. Andrea has served as music chair of the former Rotary Burlington Music Festival and has just retired from the Board of Directors of the Arts and Culture Council of Burlington, where she helped to organize two successful Culture Days events. Together with her music colleagues, she successfully chaired the Keys to the Future committee, which raised the money to purchase the Shigeru Kawai concert grand for the Burlington Performing Arts Center.

Primarily a teacher, Andrea’s students who have chosen music as a career have achieved many successes over the years. She has been adjudicating at music festivals across Canada since 1991.