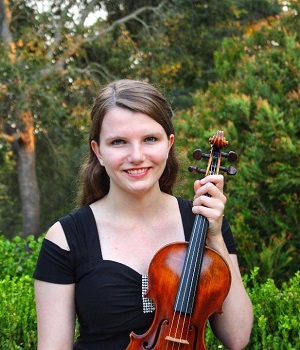 Canadian violinist Katelyn Emery is an exciting young artist based in both the Greater Toronto and Montreal Areas. In May 2021 Katelyn graduated with an Advanced Certificate in Performance from the University of Toronto where she studied with Jonathan Crow, concertmaster of the Toronto Symphony Orchestra. Katelyn is a frequent performer with the Brott Music Festival Orchestra, has been a substitute violinist with the Montreal Symphony Orchestra since 2018, and was a part of the Montreal Classical Orchestra’s mentorship program in 2017. She has spent past summers at the Music Academy of the West, Colorado College Summer Music Festival, Manchester Music Festival, National Academy Orchestra of Canada, National Youth Orchestra of Canada, Orford Arts Centre, and Domaine Forget. Solo highlights include having the opportunity to perform the Brahms and Bruch Violin Concerti with the Burlington Symphony Orchestra as winner of both their senior and junior concerto competitions. Outside of music, she enjoys cooking, baking, cardmaking, and following the sport of artistic gymnastics.

Katelyn has obtained a Master of Music degree from the Schulich School of Music at McGill University where she studied with Andrew Wan on a Graduate Excellence Fellowship. Katelyn also completed her Bachelor of Music degree at McGill under the tutelage of Professor Axel Strauss, graduating with Outstanding Achievement in Violin as well as a minor in business management. Prior to her post-secondary studies, she completed an ARCT Performance diploma and was a student of Katharine Rapoport at the Phil and Eli Taylor Academy for Young Artists in Toronto. Katelyn began her violin studies at the age of three with Janet Pasila following the Suzuki method.