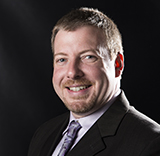 An award-winning violist and chamber musician whose playing has been described as "absolutely splendid ... dancing with emotion," (The Day) Dr Jamie Arrowsmith's career spans genres and pushes boundaries. He has collaborated with Asian and Arabic musicians as part of the London, UK-based Notes Inégales Improvisation Ensemble, and has appeared at several leading music festivals, including the BRAVO! Vail Valley Music Festival, the Strings in the Mountains Chamber Music Festival, and the Southbank Centre New Music Biennial. Jamie frequently appears as part of the Cambrian Concert Series, and continues to perform as a guest soloist and chamber musician around Northern Ontario.

Jamie holds degrees from the Eastman School of Music, Kent State University and Brunel University London. He has won numerous first prize awards as a chamber musician, including the Coleman Chamber Music Competition, the MTNA Chamber Music Competition and the Green Lake String Quartet Competition. In 2014, he joined the distinguished panel of judges for the Guangya Chengdu International Violin Competition in Chengdu, China. He has also been recognized by Northern Ontario Business as a 40 Under 40 award winner for community arts leadership, and was a co-recipient of the Joan Mantle Music Trust Community Award. In 2022, he was honoured to receive the Positive Impact Award from the Cambrian Student Council, for his work supporting student success and wellbeing. His academic work focusses on the intersection of professional and amateur practice in community orchestras, a topic for which he has published and presented papers at conferences around the world.