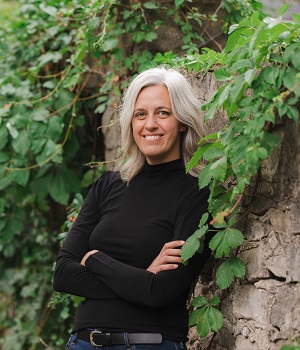 Dr Rachel Rensink-Hoff is Associate Professor of Music at Brock University Marilyn I. Walker School of Fine & Performing Arts, Conductor of the Brock University Choir and Sora Singers, and Artistic Director of the Avanti Chamber Singers.  She is founder of the Niagara Choral Workshop summer program for choral teachers and conductors and host of an online guest choral series, Shared Perspectives.  Prior to her appointment at Brock University, she spent eight years on faculty at McMaster University.

She and choirs under her direction have been the recipients of numerous honours and awards.  Rachel is the 2014 winner of the prestigious Leslie Bell Prize for Choral Conducting awarded by the Ontario Arts Council.  Her university women's choir earned first prize in their category of the 2015 National Choral Competition for Amateur Choirs and in 2019 the Avanti Chamber Singers was named "Most Promising New Adult Ensemble."

Past Vice-President of Programming for Choral Canada and Past-President of Choirs Ontario, Rachel maintains an active career as adjudicator, workshop clinician and juror, both locally and across Canada.  She has served as guest conductor of the 2017 Nova Scotia Youth Choir and the 2022 Alberta Youth Choir.

Awarded the 2010 Choral Canada National Choral Award for Outstanding Dissertation, Rachel has published numerous articles on choral pedagogy and repertoire in the Choral Journal, Anacrusis and the Canadian Music Educator.  Her ongoing work focuses on conductor training and mentorship, singing and wellbeing, and the conductor's creative processes in rehearsal and programming.  She has enjoyed presenting at conferences for Choral Canada, the Ontario Music Educators' Association and Choirs Ontario and internationally with the American Choral Director's Association and the International Federation for Choral Music World Symposium on Choral Music.

Rachel holds Master of Music and Doctoral degrees in choral conducting and music education from Western University and a Bachelor of Music Education from Calvin College, Michigan.  She has also completed additional choral studies as Conducting Fellow in the Chorus America Conducting Academy and participant in the Eastman School of Music Summer Conducting Institute, the Voice Care Network of St John's University, Minnesota, and at the University of Toronto.